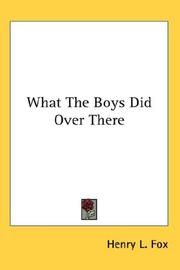 What The Boys Did Over There

WHAT THE BOYS DID OVER THERE - by Themselves. Hardcover – January 1, by Revised by N. L. Forrestal Themselves; edited by Henry L. Fox (Author) out of 5 stars 1 rating5/5(1). Comment: This is a page hardback book (no dust jacket) titled WHAT THE "BOYS" DID OVERTHERE by "Themselves". Edited by Henry Fox. Published by The Allied Overseas Veterans Stories Company in Illustrated with vintage black and white photographs of American soldiers that served in the First World War along with their stories.5/5(1).   Book from Project Gutenberg: What the "Boys" Did Over There By "Themselves" My experience as a dispatcher -- Bringing in a sniper -- On the Flanders front -- A "Devil Dog's" story -- In the Verdun sector -- The Hun I was sure I "got" -- Life in the trenches -- Two years in the Ypres salient -- A night adventure -- A machine gunner's story -- The fall of Cantigny -- The retreat from Mons -- My.   The Project Gutenberg eBook, What the "Boys" Did Over There, by Various, Edited by Henry L. (Henry Landell) Fox This eBook is for the use of anyone anywhere in the United States and most other parts of the world at no cost and with almost no restrictions whatsoever.